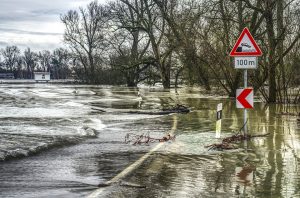 There is no coverage for flooding in standard homeowners or renters policies or in most commercial property insurance policies. Coverage is available in a separate policy from the National Flood Insurance Program (NFIP) and from a few private insurers.

The National Flood Insurance Act created the National Flood Insurance Program (NFIP), which was designed to stem the rising cost of taxpayer funded relief for flood victims and the increasing amount of damage caused by floods. The NFIP has three components: to provide flood insurance, floodplain management and flood hazard mapping. Federal flood insurance is only available where local governments have adopted adequate floodplain management regulations for their floodplain areas as set out by NFIP. More than 20,000 communities across the country participate in the program. NFIP coverage is also available outside of the high-hazard areas.

The law was amended in 1969 to provide coverage for mud flows and again in 1973. Until then, the purchase of flood insurance had been voluntary, with only about one million policies in force. The 1973 amendment put constraints on the use of federal funds in high-risk floodplains, a measure that was expected to lead to almost universal flood coverage in these zones. The law prohibits lenders that are federally regulated, supervised or insured by federal agencies from lending money on a property in a floodplain when a community is participating in the NFIP, unless the property is covered by flood insurance. The requirement for flood insurance also applies to buildings that receive financial assistance from federal agencies such as the Veterans Administration. However, because the initial mortgage on the property is frequently sold by the originating bank to another entity, enforcement of this law has been poor.

Legislation was enacted in 1994 to tighten enforcement. Regulators can now fine banks that consistently fail to enforce the law, and lenders can purchase flood insurance on behalf of homeowners who fail to buy it themselves, then bill them for coverage. The law includes a provision that denies federal disaster aid to people who have been flooded twice and have failed to purchase insurance after the first flood.

Buildings constructed in a floodplain after a community has met regulations must conform to elevation requirements. When repair, reconstruction or improvement to an older building equals or exceeds 50 percent of its market value, the structure must be updated to conform to current building codes. A 2007 NFIP study on the benefits of elevating buildings showed that due to significantly lower premiums, homeowners can usually recover the higher construction costs in less than five years for homes built in a “velocity” zone, where the structure is likely to be subject to wave damage, and in five to 15 years in a standard flood zone. The Federal Emergency Management Agency (FEMA) estimates that buildings constructed to NFIP standards suffer about 80 percent less damage annually that those not built in compliance.

How it works: The NFIP is administered by FEMA, part of the Department of Homeland Security. Flood insurance was initially only available through insurance agents who dealt directly with the federal program. The direct policy program has been supplemented since 1983 with a private/public cooperative arrangement, known as “Write Your Own,” through which a pool of insurance companies issue policies and adjust flood claims on behalf of the federal government under their own names, charging the same premium as the direct program. Participating insurers receive an expense allowance for policies written and claims processed. The federal government retains responsibility for underwriting losses. Today, most policies are issued through the Write-Your-Own program but some non-federally backed coverage is available from the private market.

The NFIP is expected to be self-supporting in an average loss year, as reflected in past experience. In an extraordinary year, as Hurricane Katrina demonstrated, losses can greatly exceed premiums, leaving the NFIP with a huge debt to the U.S. Treasury that it is unlikely to pay back. Hurricane Katrina losses and the percentage of flood damage that was uninsured led to calls for a revamping of the entire flood program.

Flood adjusters must be trained and certified to work on NFIP claims. NFIP general adjusters typically re-examine a sample of flood settlements. Insurers that fail to meet NFIP requirements must correct problems; otherwise they can be dropped from the program.

What’s in a typical policy: Flood insurance covers direct physical losses by flood and losses resulting from flood-related erosion caused by heavy or prolonged rain, coastal storm surge, snow melt, blocked storm drainage systems, levee dam failure or other similar causes. To be considered a flood, waters must cover at least two acres or affect two properties. Homes are covered for up to $250,000 on a replacement cost basis and the contents for up to $100,000 on an actual cash value basis. Replacement cost coverage pays to rebuild the structure as it was before the damage. Actual cash value is replacement cost minus the depreciation in value that occurs over time. (Excess flood insurance is available in all risk zones from some private insurers for NFIP policyholders who want additional coverage or where the homeowner’s community does not participate in the NFIP.) Coverage for the contents of basements is limited. Coverage limits for commercial property are $500,000 for the structure and another $500,000 for its contents.

To prevent people from putting off the purchase of coverage until waters are rising and flooding is inevitable, policyholders must wait 30 days before their policy takes effect. In 1993, 7,800 policies purchased at the last minute resulted in $48 million in claims against only $625,000 in premiums.

Flood Risk: As with other types of insurance, rates for flood insurance are based on the degree of risk. FEMA assesses flood risk for all the participating communities, resulting in the publication of thousands of individual flood rate maps. High-risk areas are known as Special Flood Hazard Areas or SFHAs.

Flood plain maps are redrawn periodically, removing some properties previously designated as high hazard and adding new ones. New technology enables flood mitigation programs to more accurately pinpoint areas vulnerable to flooding. As development in and around flood plains increases, run off patterns can change, causing flooding in areas that were formerly not considered high risk and vice versa.

People tend to underestimate the risk of flooding. The highest-risk areas (Zone A) have an annual flood risk of 1 percent and a 26 percent chance of flooding over the lifetime of a 30-year mortgage, compared with a 9 percent risk of fire over the same period. In addition, people who live in areas adjacent to high-risk zones may still be exposed to floods on occasion. Since the inception of the federal program, some 25 to 30 percent of all paid losses were for damage in areas not officially designated at the time of loss as SFHAs. NFIP coverage is available outside high-risk zones at a lower premium. to be continued…