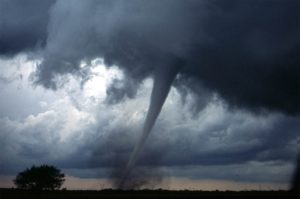 A tornado is a violently rotating column of air that extends from a thunderstorm and comes into contact with the ground, according to the National Oceanic and Atmospheric Administration (NOAA). In an average year about 1,000 tornadoes are reported nationwide, according to NOAA. Tornado intensity is measured by the enhanced Fujita (EF) scale. The scale rates tornadoes on a scale of 0 through 5, based on the amount and type of wind damage. It incorporates 28 different damage indicators, based on damage to a wide variety of structures ranging from trees to shopping malls.

The U.S. experiences more tornadoes than any other country in the world, according to a 2013 report by Lloyd’s of London. (See Executive Summary, page 4 of Tornadoes a Rising Risk? for additional findings and statistics.)

The Fujita Scale For Tornadoes

Tornadoes accounted for 40 percent of inflation-adjusted insured catastrophe losses from 1997 to 2016, according to Property Claim Services (PCS®), a Verisk Analytics® business. In 2018 insured losses from U.S. tornadoes and thunderstorms totaled $14.1 billion, down from $18 billion in 2017, according to Munich Re. The number of tornadoes fell to 1,124 in 2018 from 1,429 in 2017, according to the National Oceanic and Atmospheric Administration (NOAA). The 2017 total was the highest since 2011, when there were 1,691 tornadoes, including two spring events that resulted in more than $14 billion in losses when they occurred. There were 10 direct fatalities from tornadoes in 2018, compared with 35 in 2017, according to NOAA. May was the top month for tornadoes in 2018, with 155 twisters. The United States experiences more tornadoes than any other country, according to a 2013 report by Lloyd’s of London.

On March 3, 2019 a tornado struck southeast Alabama as part of a severe storm system that resulted in catastrophic damage in Alabama, Georgia, South Carolina and Florida. At least 23 people were killed in the March 3 tornado in Lee County, Alabama. In Beauregard, Alabama, the tornado left a half-mile wide path of destruction. The National Weather Service said that the tornado was F4 strength with top winds of 170 miles per hour. The tornado storm system of March 3 was the deadliest outbreak in the United States since a system in Arkansas and Mississippi in April 2014 killed 35 people.

There were 303 tornadoes in April which caused seven deaths: two each in Texas, Louisiana and Oklahoma and one in Mississippi. There were 556 tornadoes recorded in May. These tornadoes claimed another seven lives, including three in Missouri, two in Oklahoma and one each in Iowa and Ohio. Tornadoes from May 26 to May 29 in 13 states caused $2.8 billion in losses, according to the Property Claim Services unit of ISO. On October 20 and 21, a severe thunderstorm outbreak ripped through Texas, Oklahoma, Missouri, Arkansas, Tennessee and Louisiana, and produced several tornadoes including an EF-3 affecting the Dallas, Texas area. Aon said insured losses may reach the hundreds of million dollars.

The United States experiences more tornadoes than any other country. Tornadoes accounted for 39.9 percent of insured catastrophe losses from 1997 to 2016, according to Verisk’s Property Claim Services (PCS). A March 2017 report by Willis Re found that the average annual loss from severe convective storms is $11.23 billion (in 2016 dollars) compared to $11.28 billion from hurricanes, based on PCS data. In 2018, insured losses from U.S. tornadoes/thunderstorms totaled $14.1 billion, up from $18.2 billion in 2017, according to Munich RE. The National Oceanic and Atmospheric Administration notes that tornadoes can happen any time of year. The costliest U.S. catastrophe involving tornadoes, based on insured losses, occurred in April 2011. It hit Tuscaloosa, Alabama, and other areas, and cost $8.2 billion in insured damages (in 2018 dollars). The second costliest catastrophe involving tornadoes, based on insured losses, struck Joplin, Missouri, and other locations in May 2011. The catastrophe cost $7.8 billion in insured losses in 2018 dollars. (See chart below.) The National Weather Service posts updated information on tornadoes.

(1) Excludes Puerto Rico. A tornado that crosses state lines is counted as a single event in this chart.