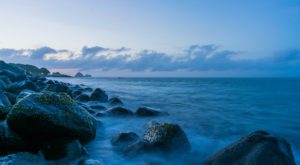 Hurricanes and storm-related flooding are responsible for the bulk of damage from disasters in the United States, accounting for annual economic losses of about $54 billion, according to the Congressional Budget Office (CBO).

These losses have been on the rise, due, in large part, to increased coastal development. More, bigger homes, more valuables inside them, more cars and infrastructure – these all can contribute to bigger losses. The CBO estimates that a combination of private insurance for wind damage, federal flood insurance, and federal disaster assistance would cover about 50 percent of losses to the residential sector and 40 percent of  commercial sector losses.

Recent research illustrates the benefits provided by mangroves, barrier islands, and coral reefs – natural features that frequently fall victim to development – in terms of limiting storm damage. In many places, mangroves are the first line of defense, their aerial roots helping to reduce erosion and dissipate storm surge. A healthy coral reef can reduce up to 97 percent of a wave’s energy before it hits the shore. Reefs — especially those that have been weakened by pollution, disease, overfishing, and ocean acidification — can be damaged by severe storms, reducing the protection they offer for coastal communities.

A separate study quantified the global flood-prevention benefits of coral reefs at $4.3 billion.

Such estimates invite debate, but even if these endangered systems provided a fraction of the loss prevention estimated, wouldn’t you think coastal communities and the insurance industry would be investing in protecting them?

The Mexican state of Quintana Roo has partnered with hotel owners, the Nature Conservancy, and the National Parks Commission to pilot a conservation strategy that involves coral reef insurance. The insurance component – a one-year parametric policy – pays out if wind speeds in excess of 100 knots hit a predefined area. Unlike traditional insurance, which pays for damage if it occurs, parametric insurance pays claims when specific conditions are met – regardless of whether damage is incurred. Without the need for claims adjustment, policyholders quickly get their benefit and can begin their recovery. In the case of the coral reef coverage, the swift payout will allow for quick damage assessments, debris removal, and initial repairs to be carried out.

Similar approaches could be applied to protecting mangroves, commercial fish stocks that can be harmed by overfishing or habitat loss, or other intrinsically valuable assets that are hard to insure with traditional approaches.